This summer I spent a week in Florence for a conference presenting a paper I wrote with my mentors at the Allen Institute for AI. Not long before, I’d been travelling around Europe with a friend and had returned to the midwest for a little over a week to do RAGBRAI with two of my best buddies and to see Jerry Seinfeld with my grandma and mom.

I’d spent quite some time thinking about the logistics (and carbon footprint) of flying across the world and back again in such a short time, but I said c’est la vie because I was about to be working a corporate job anyway.

My time at the conference is perhaps entirely a mirage; it was very hot and very humid the whole time, and many places didn’t have air conditioning (including the airbnb I shared with a college friend). I stayed up late going to parties hosted by tech companies on rooftops overlooking the river in Florence, the view of which is much more beautiful at night when you can’t make out the distinct milky brown water. I discovered the lengths of my affinity for prosecco and awoke feeling groggy and covered in sweat each morning, only to strap on my sandals and walk on cobblestone streets to go to talks about natural language processing.

One of my favorite nights was spent with some people I’d just met; a group of ai researchers from London. I knew one from twitter and another through a colleague, but laughing in a funny Italian bar learning about the definition of ‘posh’ gave me a warm sense of belonging like that of road trips with my best friends or holidays with my family.

After the conference in Florence, I needed to find my way up to Germany over the course of a few days for a summer school hosted by the Max Planck Institute, Cornell, and UMD. It was in Saarbrücken, which is quite close to the French border and not so far from Frankfurt.

Rewinding a bit, while traveling before flying back to the midwest, I spent a couple of days in Barcelona. While there, I met a kind and stout Swedish man named Björn. I told him my next stop was Zurich and then Montreux (in the German and French parts of Switzerland respectively), and Björn thought it was a bummer I wasn’t going to the Italian part of Switzerland… something to the tune of “it’s the best mix of Italian laid-back-ness and Swiss orderliness.”

For Björn, I decided to stop in Lugano on my way to Germany. After an exhausting week and bereft of hydration, I woke up and scrambled to make it to the Florence train station. There was some sort of delay and buying tickets was confusing, and even though I only had a single bag, with sweat covering every inch of me I felt I’d packed too much.

I made it onto the right train eventually and spent the 4+ hour ride reading a mystery novel intended for women who lived in American suburbs (…me?) and catching up on This American Life.

By the time the train was nearing Lugano, I found myself wishing I’d purchased a window seat. The view of the lake was remarkable; it reminded me of the view in Montreux but was even more beautiful. Having lived in Seattle for several years, I’d lost my breath more than a few times from views on PNW hikes, but this was beyond anything I’d ever imagined.

The water sparkled as the train wove between hills and mountains, speckled with villas and full of lush greenery. As we neared the train station, I braced myself for a trek to the hotel I’d booked. When I got off the train, it was bright and sunny, and overlooking the stunning water I found myself in no hurry.

After dropping my stuff at the hotel, I was determined to make the most of the next 24 hours. I walked down a tree-lined path that I would walk a few times more; it was unforgettable. 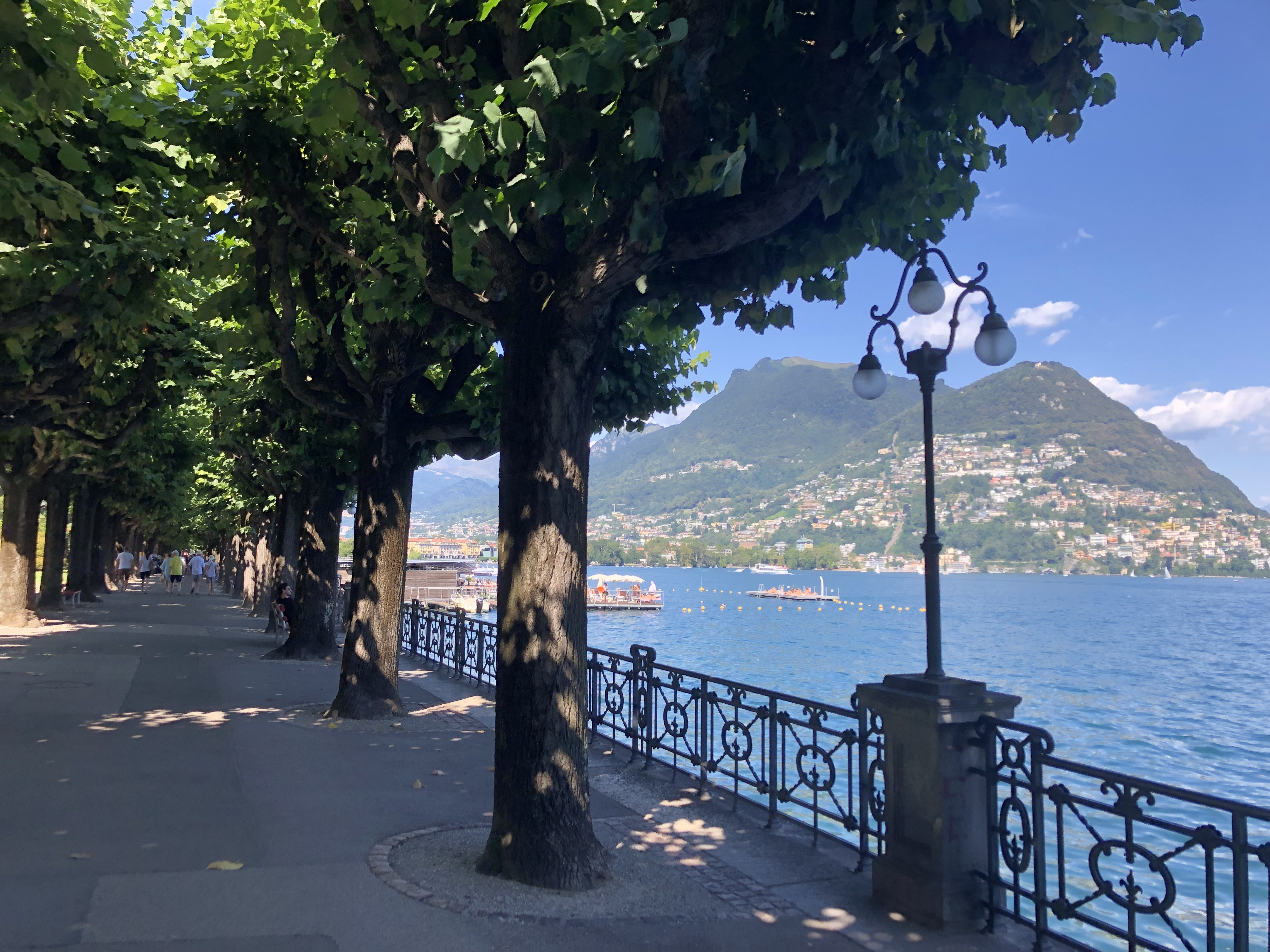 I’ve always loved the feeling of being wrapped under canopies; hikes in open air are always more disconcerting to me than ones under tall bushy trees. When I was a child, I loved to build forts and tuck myself away, constructing a world inside my head and projecting it onto the blankets surrounding me that was far nicer than the world outside my fort.

Later that day, I rode a funicular up a mountain and walked myself back down. I found myself in a small village, and from there I took a bus back to the town center.

I walked past the tree-lined walkway back to the hotel in the dim evening light, and just as I reached the hotel I followed the path down a set of stairs into the water. I stepped down until my kneecaps were covered and felt immersed in the perfection I’d been admiring. It felt like a baptism; an acknowledgment that I deserved to be immersed in that which I admired. That something of an unburdened happiness was, in fact, attainable.

I’ve lived in Mountain View for nearly a year and love the nice weather, friendly people, and overall very nice quality of life. Often, though, I feel a nagging sense that I should be taking more risks and living in a more urban area and waiting just a little bit longer before I enjoy this suburban life. I think about the time I’ve spent in big cities and traveling to other countries and the version of myself that feels in awe of my very existence.

Anyway, I like to run a lot and sometimes I run near the Mountain View caltrain station, which has a tree-lined path next to it. The first time I ran through it I was teleported back to the blissful dream of my 24 hours in Lugano. And while part of me counts every way the world outside the canopy of trees is different in Mountain View, another part feels immense gratitude to have gotten a taste of such beauty in Lugano. Besides, only a few years ago, Mountin View would have been like Lugano to me. 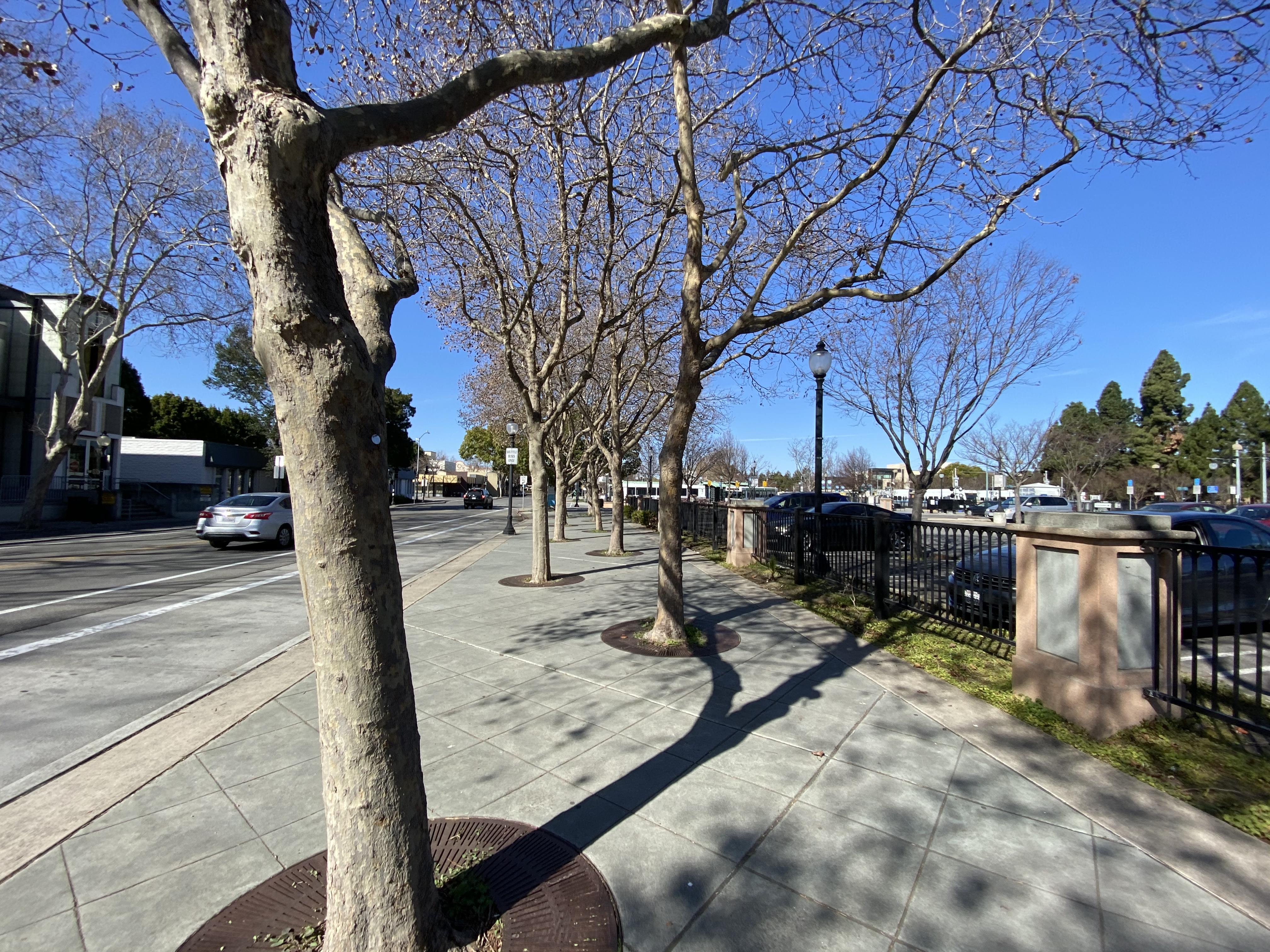 “And of course the Man Without Qualities also had modern knowledge somewhere in his consciousness, whether he happened to be thinking about it or not. And there now was water, a colourless liquid, blue only in dense layers, odourless and tasteless (as one had repeated in school so often that one could never forget it again), although physiologically it also included bacteria, vegetable matter, air, iron, calcium sulphate and calcium bicarbonate, and this archetype of all liquids was, physically speaking, fundamentally not a liquid at all but, according to circumstances, a solid body, a liquid or a gas. Ultimately the whole thing dissolved into systems of formulae that were all somehow connected with each other, and in the whole wide world there were only a few dozen people who thought alike about even as simple a thing as water; all the rest talked about it in languages that were at home somewhere between today and several thousands of years ago.”

-Musil, The Man Without Qualities